Luna is the foundation of knl Illostras and she was truly a gift from heaven. Always loving and happy and always ready for fun and action as well as some cuddling on the coach.

Luna did great both in the showring and on the LC-tracks . She was almost always placed among the top 5 bitches at shows. She finished her SEUCH first try after turning 2 years.

In 2005 she won Best In Show as well as “Best Head & Expression” and “Best Movements” at the Norwegian Podenco Special.

She has several other BIS-placements as junior, youngster, adult and as a veteran

She became both Swedish and Norwegian LC Ch on only 4 trails.

Luna truly wrote breed history in 2009 as she won BOB at the first official LC trial in Denmark and also became the first PH ever with a Danish LC Ch title and the first with 3 from Sweden, Norway and Denmark.

Luna only had one litter, our A-litter.

In December 2008 she had 8 beautiful puppies 6 males and 2 females.

Thank you so much, from the bottom of my heart, Anna Larsson, knl Faouziah for letting me care for this precious jewel that did brighten every day of our life! Luna was so very special to us!

Now she runs free and happy with her best friend Nisse on the other side of the rainbow bridge. 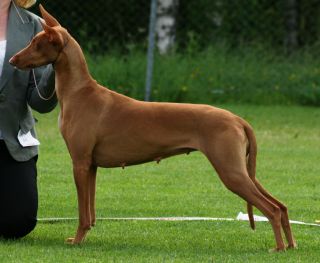